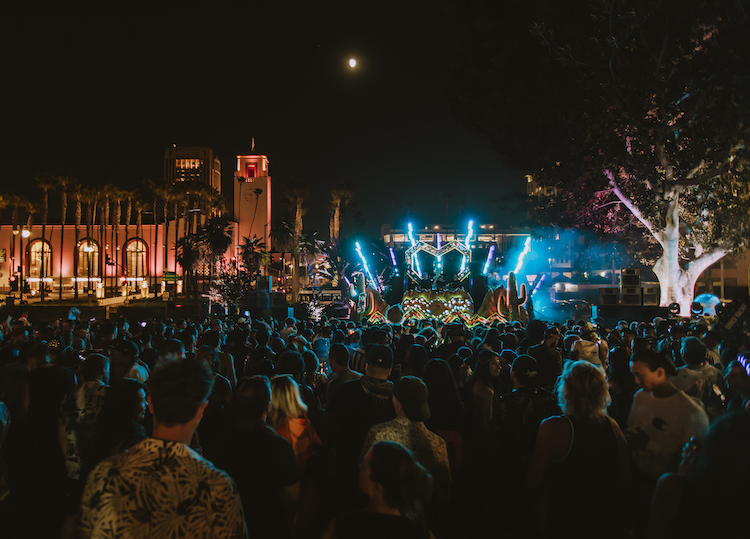 In the electronic dance community Desert Hearts is a well-known force to be reckoned with. Their style of transformational events paired with the sounds of house & techno spoken in the language of Funktion-One sound is something that has put their brand at the forefront of the scene. With their staple Desert Hearts festival happening every Spring, City Hearts is every fans one-stop shop to all things DH in the off-season without the hassle of leaving the big city.

We took advantage of LA’s metro line transportation to make our way to the City Hearts festival grounds on day one. From North Hollywood it was a straight shot to Union Station, the hub of all major public transport lines in DTLA. The low end rumble of house music could be heard upon walking out of the station. The festival was conveniently across the street from Union Station and it didn’t take us long to make it inside of the gorgeous El Pueblo de Los Angeles, a historical park in the middle of the city.

We made it in for the end of Wyatt Marshall’s set and the shade was already setting in for everyone on the dance floor. Porky and Kate Simko were beginning their B2B set as we began exploring the festival. The amount of art placed around the landscape quickly caught our eye. Similar to the Desert Hearts festival, there was a ton of art on display, for sale, and being created live. Rhadwood was a standout exhibit that used the natural textures of wood to create beautiful paintings and installations.

Porky and Kate Simko continued to summon the techno wooks to the dance floor with some proper old-school house, disco, and minimal cuts. Up next was the techno trinity supergroup Marbs, Evan Casey, and Rinzen representing the sub-label Desert Hearts Black. What we loved about this performance was how each of them brought such a unique vibe to the dancefloor. Marbs on the darker playa-tech side complimented Evan’s heavy analog melodic sound, whereas Rinzen kept the crowd wanting more with his theatrical breakdowns and builds.

Exploring the festival there was so much work put into the scene it was overwhelming taking it all in. There was a geodesic dome with talks hosted inside as well as a type of geodesic structure behind the dancefloor for festival goers to chill inside. Black Magic hosted their own bar near the critically acclaimed Burning Man camp Pile Palace, who’s pillow-based design was easy to get lost inside of. As the sun finally set on Downtown Los Angeles we couldn’t help but admire the central location of the festival. All around were buildings, trees, and the monumental Union Station, illuminated by the bright stage of the festival. City Hearts premiered a stage that displayed a desert mountain landscape and glowing cactus pieces. Up next on the roster was Lee Reynolds B2B J.Phlip, a classic mash between the residents of Desert Hearts and Dirtybird. Both artists have extremely eclectic styles so we had no clue what to expect from the set. Things definitely got weird fast. They threw down a ton of old gems in the realms of acid, breaks, and ghetto house. Their set took many left turns and stayed exciting up until the closer, freestyle classic ‘When I Hear Music’ by Debbie Deb.

The last B2B of the night was from DH captain Mikey Lion alongside UK based wAFF. Both carried their weight with fast, funky, and soulful tech house groovers. wAFF is notorious for his suspenseful buildups and these moments were absolutely necessary for bringing the party up several more notches throughout the night.

Tiga ended the night on a high-note with his signature style of robotic analog house music. Highlight of his set was hearing him drop Soulwax’s Essential Nine, something we never thought would sound so amazing live. After an extremely solid first night, we could not wait to return to the park for another day of house, techno, and love. The stage opened up with a heavy B2B curated by the heads of Percomaniacs, Rybo and Lubelski. This was followed by another B2B featuring Andreas Henneberg and Mikey Lion. This set was special because Andreas is notorious for being a Berlin techno icon, and has performed with a live orchestra as well. Surely enough his set delivered, and his style went hand in hand with Mikey’s.

After taking some more time to walk around and check out the vendors, we returned for Doc Martin B2B Lee Reynolds. Seeing Doc play at this event after the loss of his wife was not only strong, but the entire crowd’s support added a whole other layer of energy to the mix. It just goes to show how powerful music can be, and how strong the community that Desert Hearts created is. Nathan Barato was slated to go B2B with Porky afterwards, but could not make it. There was no issue finding a fill in for him though, as Lauren Lane showed up and brought some of that Paradise flavor to take the crowd into the final hours of the event. This set was followed by Thugfucker B2B Marbs, who played 90 minutes of weird trippy techno which set the perfect precedent for Patrick Topping to close out the show.

The amount of growth that Desert Hearts has gained since our first experience at their festival in 2015 is unbelievable. They’ve been able to bring their sound worldwide, and take their festival around to cities all across the country. City Hearts was literally set up to be a miniature Desert Hearts, and the vibe was (for lack of a better term) perfect. We can’t wait to see what the crew has in store for 2020. 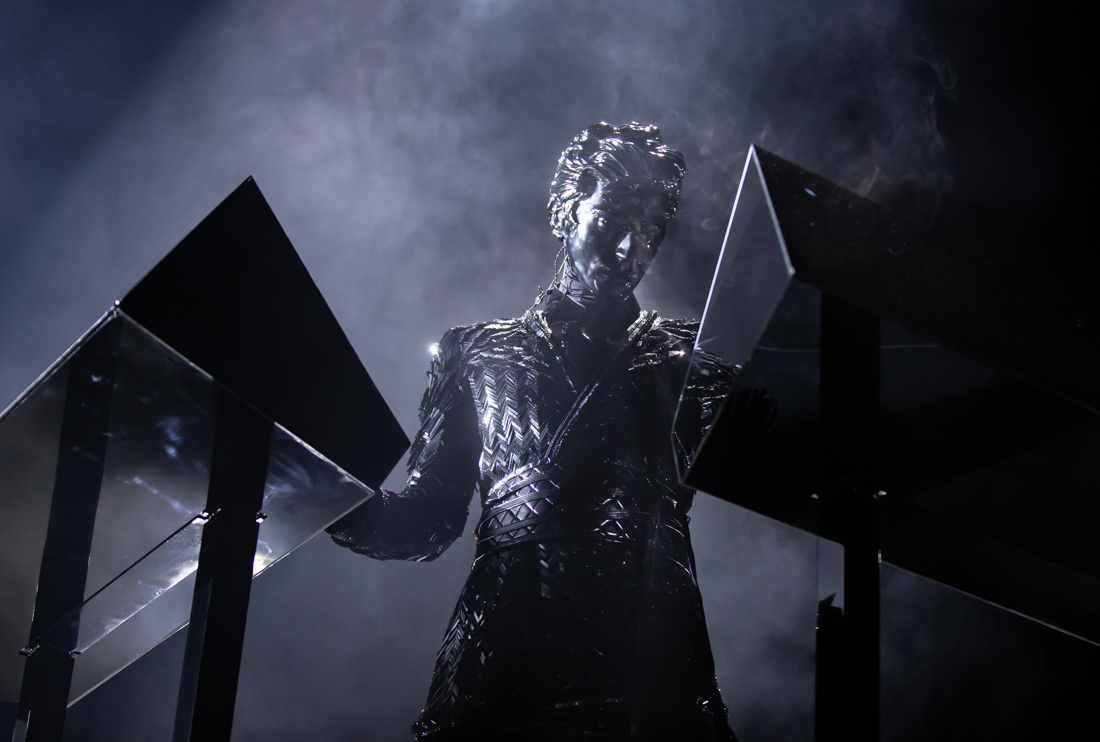 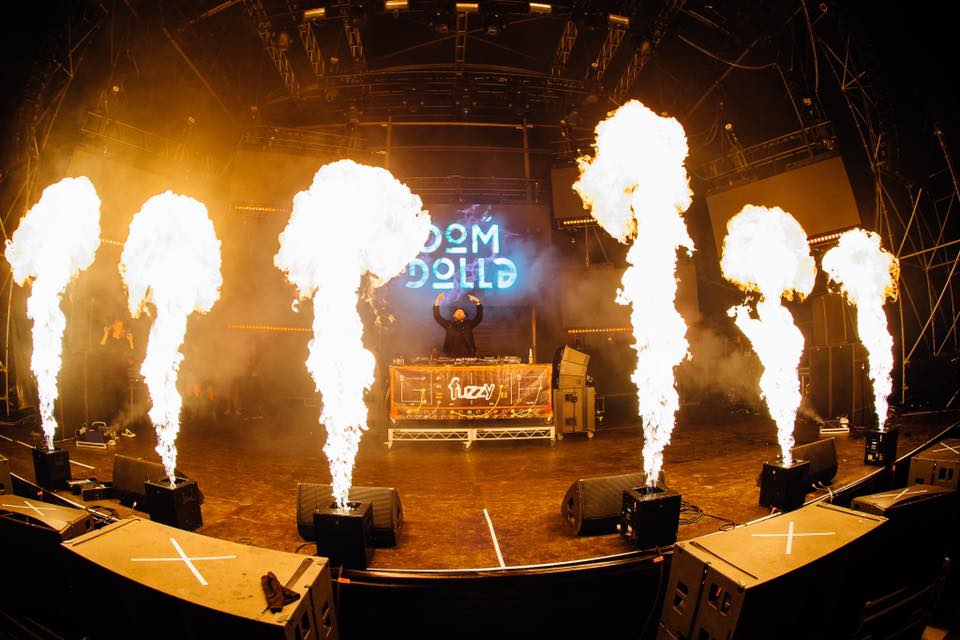