Since the introduction of the new house and techno festival in the early months of 2021, ARC Music Festival had fanatics waiting frantically for the arrival of Labor Day Weekend to break in this new event that encompasses the deeply rooted house culture in Chicago, Illinois. With a phenomenal lineup including acts ranging from some of Chicago’s classic house pioneers Derrick Carter, Gene Farris, DJ Pierre, DJ Heather, and Hiroko Yamamura to international icons The Martinez Brothers, Idriss D, Eric Prydz, Deborah de Luca, Camelphat, and Patrick Topping to name a few, the festival caters to the rich taste buds of any house and techno enthusiast. ARC served the plate AND more.

As soon as you walked in the proximity of the festival, you could hear the banging techno and groovy baselines that encapsulated Union Park. Besides not having a parking lot easily accessible, the journey to ARC encouraged tuning into the Chicago culture and catching a ride on the subway or any means of public transportation to make your way to the event. Although an issue to some, this added to the Chicago experience.

Once inside the event, whether you entered the festival through GA entrance, Global VIP entrance, or ICON VIP entrance, you immediately felt the excitement that attendees had for the weekend, especially since this was the first festival for the majority since the pandemic began.

Greeted by unique, grand, and photo-friendly art throughout the festival grounds, attendees cheerfully danced and snapped insta-worthy photos with their squads. Replicating some of Chicago’s iconic art such as The Lions of Michigan Avenue, ARC recreated these iconic statues with a twist – bringing a steam-punk spin to these guardian figures and symbols of strength as you entered into the mainstage area of The Grid. Any art fanatic would appreciate the little details the festival made to highlight Chicago, especially finding ways to incorporate these things into an atmosphere that is difficult to recreate.

Housing four stages including The Grid, The Expansions Stage, Elrow Stage, and The ARC Car stage presented by GoodBus, every stage shined in its own light. The Grid housed ARC’s mainstage acts including Luttrell, ZHU, Nicole Moudaber, Jeremy Olander, and Eric Prydz. Surrounded by shipping containers painted in bright yellow, green, and blue (ARC’s branded colors), the containers complimented the layout of the area adding a grand industrial feel to it.

As soon as you entered The Expansions Stage, you immediately stepped into an open space surrounded by trees that revels you straight into a jungle. Decorated in vines and greenery, The Expansions Stage savored that Tulum-like experience to make you feel like you were partying in the depths of the jungle. Deborah de Luca made this stage her own on day one as she murdered the decks with a pounding dark techno set, including a hammering rework of Marie Davidson’s ‘Work It’. The dirt at this stage was a bit of an issue, as many chose to wear their masks in this area as the dirt continued to rise as attendees happily danced. Although a minor issue, this made it a bit difficult to breathe which also added a layer of dirt on skin and clothing.

If you wanted to party non-stop and be surrounded by the silliest of characters, confetti for days, kooky inflatables, and techy-tunes that kept your booty shaking – The Elrow Stage was the place to be. As soon as you made your way through the festival into the giant tent that housed the madness that Elrow is proficient in, you were greeted by a ceiling of decorations consisting of all shapes and sizes along with themed performers dancing on stilts that added to the PSYCHEDELIC experience that Elrow aimed for. Patrick Topping with his UK upbringing delivered an upbeat house set that was perfect for the ultimate Elrow experience. From start to finish, mayhem filled the Elrow tent making it the place you did not want to turn away from or leave without an inflatable for a souvenir!

The ARC Car Stage presented by Goodbus lay between The Expansions Stage and The Elrow Stage. Sound bled between these stages slightly, but this was not a major issue. As you made your way throughout the festival this was a concern, but once you were planted at a stage you were fully indulged in the sounds of the playing artist. Consisting of Chicago’s rising local stars, The ARC Car Stage encompassed an industrial feel, similar to The Grid as it was composed of a school bus that was converted into a stage, holding the artist at the top of the bus and attendees danced below. Some of Chicago’s iconic rising stars included Azzeca, Cinna, Boots & Claps, and Doc Pearson.

Each stage was distinguishable from one another and was difficult to choose a favorite between them all. Already facing conflicting set schedules, the stage housing the act was another layer of consideration, which was a great problem to have.

The VIP areas including Global VIP and ICON VIP were great as bathrooms were clean, tidy, and made easily accessible. Viewing areas at The Grid were astounding as you could oversee all of the crowd and enjoy the production clear of view. The viewing areas at other stages could have been more accessible and distinguishable, as entrances to these areas got lost within the crowd. Complimentary drinks as you entered the festival gates were definitely a plus. For those considering purchasing any of these VIP options for next year, they are definitely recommendable as entry into the festival was also easier and faster. Overall, a great VIP experience.

Once the clock strikes 10 pm and the festival gates closed, after-parties continued the hype across various venues in the city of Chicago. From PRSYM nightclub, Concord Music Hall, Cermak Hall, Spybar, and Radius – the bass kept bumpin’ the grooves kept groovin’ as headlining acts from the festival created an intimate experience in these venues.

Besides a bottle of water being more expensive than a can of Redbull, water stations lacking throughout the festival, dirt in some areas of the festival along with slight bleeding of sounds between stages, these minor issues didn’t ruin what ARC turned out to be.

ARC Music Festival was such a successful turnout, it’s no doubt that next year and future editions will already be a hit. ARC’s debut had such a high expectation since it took place in a city that is exquisite and rich in house music history; the bar was met and definitely exceeded expectations! From the art, stage design, range of musical talent, and location, the debut of this festival was outstanding.

ARC Music Festival should definitely be on your list of events to attend in 2022 if you haven’t already started building that bucket list. 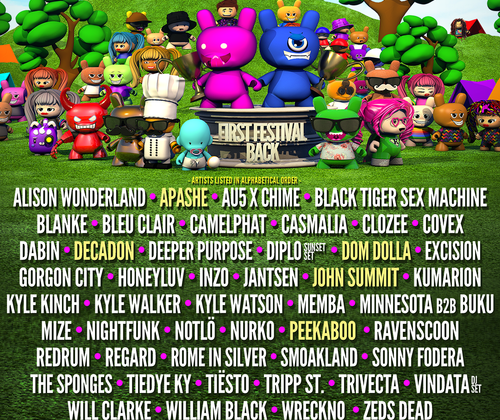