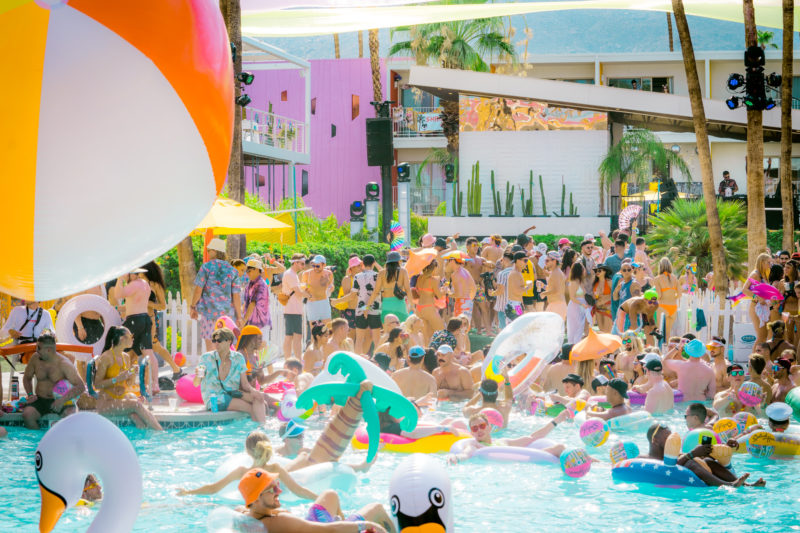 After Rescheduling twice since the Covid-19 outbreak, Splash House finally returned to the town of Palm Springs on the weekend of August 13th, 2021. Rather than hosting one weekend in June and one in August, the festival returned with two weekends in a row. Splash House is hosted at The Renaissance, The Saguaro, and Margaritaville (fka The Riviera) and from start to finish we were amazed at the powerful scenery, music, and energy all weekend long.

Upon arrival Friday afternoon we were pleased at how serious the festival was taking covid safety protocols. A negative covid test or proof of vaccination was required to grab a wristband which gained you access to the resorts.

The energy levels were high as festival goers emptied their cars and hauled off party supplies to their rooms including renegade speakers setups and funky balcony decor. By 9PM most attendees were settled into their hotel rooms and getting ready to take on night one. Rather than hosting pool parties, the festival organizers decided to make night one all about the unique afterparty destination located at the Palm Springs Air Museum. Slowly but surely the party-goers swarmed in from all hotels to catch the euphonious sounds of Lane 8 for his three-hour headline performance.

Other festivals might throw after-hours parties at nightclubs, but at Splash House the “afters” is nothing short of a festival within itself. The venue is surrounded by fighter jets and other small aircrafts. There were tons of clean porta-potties towards the entrance with plenty of handwashing stations. The massive bar was located inside an airplane hangar with lights going off all around. Walking towards the stage you can find food trucks, interactive carnival booths by 818 Tequila, picnic tables, bleachers, photo installations, and other sites to keep busy between trips from the stage to the bar.

The air museum had a solid energy both during Lane 8’s set on Friday and Green Velvet/Mason Maynard’s sets on Saturday. This particular weekend had a nice breeze that carried over the air museum making it an enjoyable afters both nights in a row.

Things started to kick up quickly on day two and our gang was eager to get on the dancefloor in time for DJ Susan and Nutty’s set at the Renaissance stage. The boys held it down with a mighty selection of tech house edits, IDs, and originals that quickly pumped the party up. The dance floor was definitely hot at 1PM but the shade structure, mister fans, and pool helped us keep cool in between dancing in the crowd.

Margaritaville was next on our list. We caught a shuttle from The Renaissance and it felt as if we were on our way to elementary school. Attendees were cracking jokes, making friends, sneaking sips of hard seltzers, and chanting songs all the way to the next stage. The Margaritaville pool area was way more intimate than the Renaissance. As we quickly jumped into the pool, we felt completely seduced by the amazing sound system thumping through the ancient pyramid-like structure. At Margaritaville the DJ booth sits directly above the swimming area. This meant that every bass drop cued a tsunami of splashing. It might have been the most fun we had all weekend.

Saguaro was last on our bucket list of resorts for the day. We pulled in just as Martin Ikin B2B Illyus & Barrientos was beginning. Rather than hit the stage/pool area, we got side tracked to a hotel renegade hosted by Hot City Records. It was quintessential Splash House vibes at its peak. Finally we made our way back to the Renaissance to catch closing sets from Mark Knight and Dom Dolla. This stage went on until 9PM which was 30 minutes later than the others. Everyone funneled into the dancefloor and the night ended off with a massive bang.

After the stages ended we made our way back to the airline hanger for night two of the afters, this time we found ourselves watching a solo set by the one and only Green Velvet. The vibes were immaculate, and the system was absolutely pumping. And in true Green Velvet fashion, he had complete control of the crowd. Definitely one of our favorite sets all weekend.

The next day we explored the Renaissance a bit more and were pleased to find a hidden oasis right next to the resort and the convention center. There was a grass area with a massive shade structure. This was new to Splash House this year. Here you could find merchandise, unique food options, photo installations, and a few cocktail bars. We thought it was a great way for festival goers to get more bang for their trip to the Renaissance without interrupting the vibes at the pool.

Afterwards we hit up the Green Dragon booth before entering the festival. Green Dragon is a local dispensary. They had stylish pop-up booths at every resort and offered 30% off to Splash House attendees all weekend. They also offered cannabis deliveries throughout Palm Springs.

Sunday’s lineup had heat for days, similar to the weather which creeped past 100 degrees. We caught big sets from Bones, Lee Wells, Lubelski, Sohmi, and Blossom. Although the lineup was smashing, we noticed many attendees dipped from the pool stages and decided to take solace in the air conditioned renegade parties in the hotels. We joined in on the fun until the sun began setting.

After tons of amazing performances we ended our night catching Tokimonsta at the Saguaro and quickly ubering off to Get Real closing out the Renaissance. After the mainstages finally ended for the weekend we assumed the party was officially over. There was no announced after party so the festivities were officially done. To our surprise, the hotels became the main attraction as the renegade parties finally had a chance to shine without any competing stages. Things got carried away and it sent the weekend off with a final bang.

This was my third time covering Splash House. Each time I had a little taste of the action by attending for a day at a time. This time around I decided to do it right with a pool-view suite at the Renaissance hotel. Attending from Friday through Sunday helped me get a full scope of what makes Splash House special. Between watching DJ sets from your balcony and attending various renegade parties in the resorts, there were friends to be made everywhere. Splash House is full of magic and has easily become one of my all-time favorite festivals in SoCal. 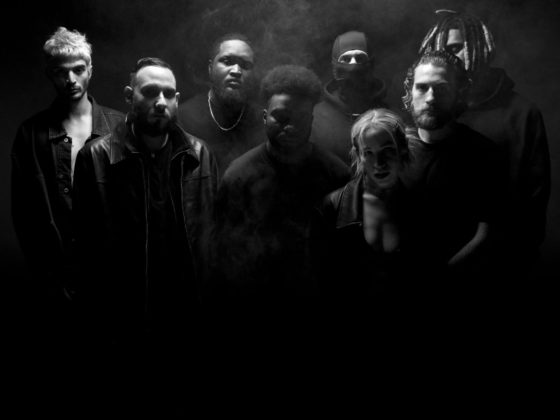